“Every player is different and we try and understand their routines so we have their stuff taken care of ahead of time.”

The career that Troy Parchman has held for the past 25 years “just sort of happened.”

Parchman (BA’88, BSPE’88) is the equipment manager for the Chicago Blackhawks and the road to get to the National Hockey League (NHL) began at the University of Saskatchewan (USask).

“In a very rudimentary way, I was the equipment manager in high school,” said Parchman. “I was not one to play football, but I wanted to be around my friends … I was essentially a glorified water boy.”

When Parchman graduated high school in Moose Jaw, Sask., he didn’t know what we wanted to do.

So, he applied to USask. At the time, Brian Towriss (BComm’78) was the Huskies football coach. His former high school coach, Dave Green, mentioned Parchman to Towriss. When he got accepted into USask, things quickly fell into place.

Juggling the roles with the Huskies and schooling taught Parchman a lot about himself.

“I think I had a strong work ethic to start with. It was debatable what the highest priority was, whether it was hockey, football, or my studies,” he said. “I was pretty proud of myself though, I never missed my classes. I had to learn to budget my time to get everything done.”

Parchman’s time at USask spanned six years, a degree in sociology and in physical education, with no real direction on what he was going to do after graduating.

“When I graduated, I didn’t know what I wanted to do,” he said. “I thought I might go work in the Physical Education building.”

That summer, he got a call from fellow USask alumnus Dave King (BAPE’71, BEd’72, LLD’18), who was coaching the Canadian national team, who invited him to work a summer camp. They offered him a job after camp wrapped up.

“As a young guy, that was quite an experience, but also a big step because they were still some things I had to learn,” Parchman said. “For example, at USask, we didn’t have riveters. I learned how to use the riveter which hold the blades on the skate, to sharpen skates better, and how to pack enough stuff for a month on the road.” 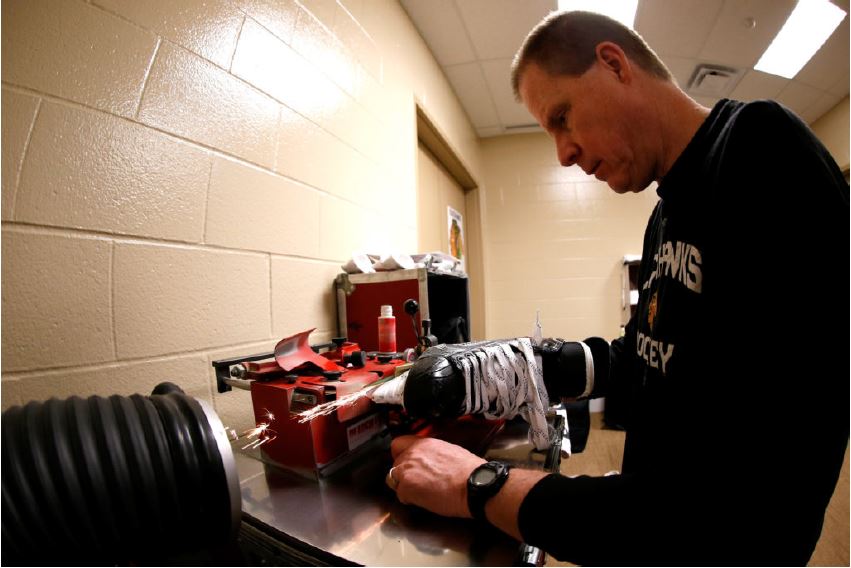 He spent six years with Team Canada as their equipment manager, supporting the team and travelling the world for games.

“In those days, it was still amateurs. We would bring in all kinds of guys and some would play all year, or just a few games at a time,” he said. “It was a great experience.”

After the 1994 Olympics in Lillehammer, Norway, Parchman was once again at a crossroads in his career.

In August, Parchman got an unexpected call. It was Paul Baxter from the Chicago Blackhawks. They had a late opening and needed to fill it before the season started.

“This was the middle of August. It was too late in the year to try and get someone from another team with camp three weeks away,” he said.

“I didn’t know anybody, but someone vouched for me,” he said. “I met them on Friday, flew home, packed a bag, and started working on the Monday.”

To say his start with the Blackhawks was a whirlwind would be an understatement.

The NHL was headed into a four month lockout, the team had just moved into the United Center, and Parchman’s first task was to empty all the boxes and organize everything.

“We did training camp and then I had four months to get organized,” he said. “I came into this new situation, but trainer Lou Varga was a big help.”

With the unexpected situation of the lockout, Parchman lived in a hotel for a month, then stayed at the rink for a month before staying with one of the trainers.

“Everything worked out in the end,” he said.

And it has worked out for the past 25 years, despite five general managers and 11 coaching personnel changes over that time.

“It’s hard to believe because it doesn’t feel like it has been that long,” said Parchman. “It doesn’t matter that I’ve been here 25 years, you still need to adapt. When a new coach or GM comes in, it’s not how we’ve done things in the past, it’s how they want to do things now.”

Most of the work is done before the players even arrive for the day, allowing them to assist with emergencies or other requests during practice.

“Every player is different and we try and understand their routines so we have their stuff taken care of ahead of time,” said Parchman. “It is neat dealing with 22 players and their personalities. We learn to work with them on what they like.”

With the Blackhawks, Parchman has seen the highs and lows of hockey. As a kid growing up in Moose Jaw, he played road hockey and always dreamed about winning a Stanley Cup. Not only was he able to experience that feeling, but the Blackhawks won three in a span of five years.

“There are guys who’ve been in this league for decades and never win. So when we won the first one, I felt so blessed. Then, we won three and I still can’t believe it,” he said. “They are all special in their own way.”

As Parchman continues his journey with the Blackhawks, he takes the good with the bad. He knows one day he will hang up the towel. But, after 25 years, he is still very much enjoying being a part of the game.

“It takes a special person to do what we do,” he said. “I know there will be a day where I physically won’t be able to do this. I am so grateful to have this opportunity and it wouldn’t be possible without the people that helped me along the way.”